PHOENIX – At least 70 American Airlines ground crew workers at Phoenix Sky Harbor International Airport have tested positive for COVID-19 as of April 27, including four that required hospitalization, according to union officials. The numbers are expected to climb as individuals from the 1,000-member “below the wing” crews continue getting tested.

The first case at Sky Harbor was reported to the airline on April 8; within 10 days, that number was up to 20, according to Donald Carbonneau, president of Sky Harbor Lodge 2559, the local chapter of the International Association of Machinists & Aerospace Workers (IAM) union that represents portions of American Airlines’ fleet services employees and other airlines at Sky Harbor.

The total number of confirmed COVID-19 cases at Sky Harbor airport are unknown.

AZCIR interviewed nearly a dozen American Airlines employees and union representatives, obtained internal company memos and emails, and reviewed hundreds of posts and comments on a private employee Facebook page detailing concerns among employees about the airline’s response to COVID-19 at Sky Harbor. Employees other than those representing their colleagues in unions declined to be identified because it violated company policy and they feared retribution for discussing company business.

AZCIR also contacted American Airlines managers based at Sky Harbor, but they either declined to comment because they were not authorized to speak on behalf of the corporation or did not return messages left by AZCIR reporters.

The known American Airlines COVID-19 cases in Phoenix are among crews who load and unload passenger luggage and cargo on jetways and at baggage claims. They also include maintenance workers and those responsible for directing aircraft at terminal gates.

The airline workers are part of a limited group that federal and state governments have deemed essential employees, working on-location during a pandemic with a patchwork of guidance from local, state and federal officials.

As the limited supply of personal protective equipment (PPE) hampers critical service staff in sectors from healthcare to first responders, other essential workers are facing similar shortages – and rising infection rates. Questions about whether essential workers can stay safe on the job come amid the federal government’s multi-billion dollar bailout of the airline industry and calls to begin reopening business across the United States. In Arizona, Gov. Doug Ducey has yet to make a decision on whether he’ll lift business restrictions set to expire on April 30.

“We need these tests to be available to our workforce as soon as possible, regardless of symptom status,” Yamashita wrote. “It is critical for Arizona to take the lead on ensuring its residents and essential workers safety.”

The letter also highlighted concerns regarding limited information about confirmed COVID-19 cases among American Airlines staff at Sky Harbor, citing the company’s reluctance to share infection data as “the reason that this workforce’s infection rate has spiked.”

Union officials told AZCIR that American Airlines’ refusal to release data is not unique in the industry. Other airlines, officials claim, have been less transparent.

American Airlines ramp employees and their unions claim the surge in Coronavirus infections at the company’s Sky Harbor ground terminals is the result of a delayed response by the airline to distribute PPE such as personal hand sanitizer and masks. They also cited delays by the company – and staff – to enforce social distancing in break rooms where up to 50 employees waited in between flights.

American Airlines did not fill the hand sanitizer stations in break rooms at its Sky Harbor facilities to “conserve the supply of sanitizer,” posting signs as early as April 4 that employees should instead focus on washing their hands, documents show. Employees also claimed the airline is delaying notifications to staff who may have come into contact with a colleague who tested positive for the virus – in some cases more than a week after potential exposure.

“I wouldn’t be shocked to hear tomorrow, or have a conversation with somebody to hear it’s 75 or 80 [COVID-19 infections] just on how it’s gone over the last couple of days,” said Pat Rezler, an American Airline fleet services employee on leave to represent employees for District Lodge 141, another local chapter of the IAM. “I’m afraid that seeing how it took off the way it did, I am afraid that it may have been a little too little too late.”

Before CDC guidelines changed on April 3 to recommend face masks, unions had to push the airlines to allow workers to use their own masks and gloves, said Gary Peterson, the international vice president of the Transport Workers Union, which also represents American Airlines ramp workers at Sky Harbor. 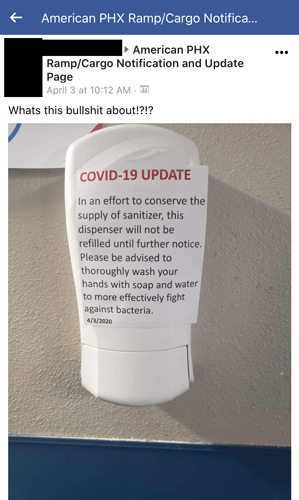 “The safety of our team members remains our highest priority,” Gion wrote in a statement to AZCIR. “In addition to following all (U.S.) Centers for Disease Control and Prevention guidance, we continue to coordinate closely with public health officials to adopt and explore new expanded health and safety measures at PHX including face masks and temperature tests, as well as other proactive efforts.”

The company is not releasing publicly the number of COVID-19 infections among its employees at Sky Harbor or among its more than 130,000 employees worldwide, Gion said.

Rezler said he doesn’t fault the airline completely for how the virus has spread, adding that some ramp workers in Phoenix didn’t take the social distancing measures seriously during the early stages of the pandemic.

On April 8, CDC issued new guidelines to allow essential workers who have been exposed to the virus to return to work without quarantining for fourteen days if they are asymptomatic. The guidelines recommend checking the employee’s temperature and monitoring for COVID-19 symptoms.

American Airlines ramp employees who were exposed to the virus have continued working, though the airline had yet to begin temperature testing at Sky Harbor as of April 26. The airline said in an emailed statement that it expects to begin testing “early this week.” The company also has created dispersed break room stations to make it easier for employees to social distance while working.

Rezler, who represents American Airlines fleet services employees from Sky Harbor and other airports, said Phoenix is “probably one of the worst ones” for virus outbreaks. 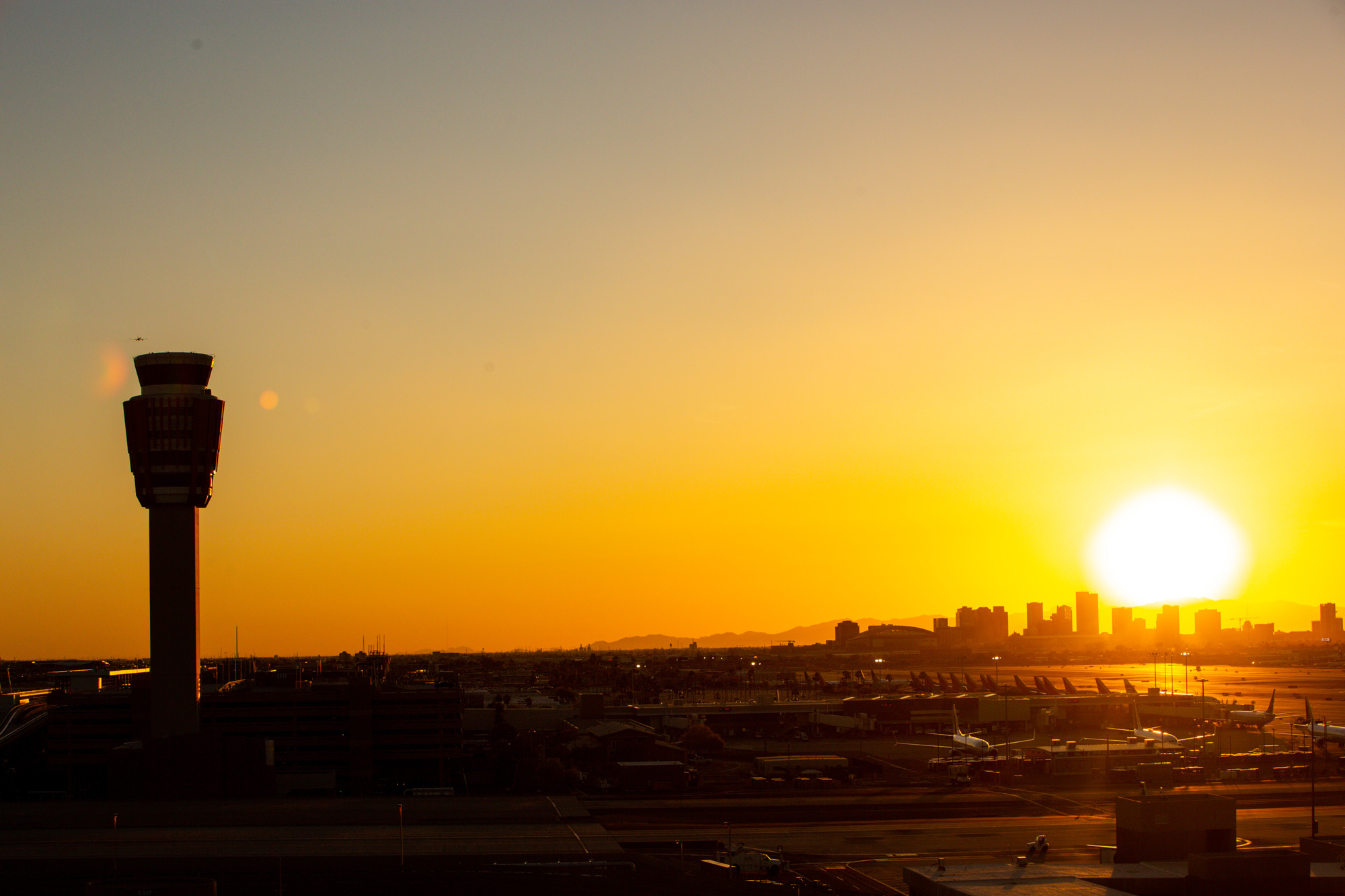 AZCIR contacted all major airlines operating out of Sky Harbor, including Delta, Southwest, and American, and all declined to provide the number of COVID-19 cases among staff. United Airlines did not return a request for comment. Only the City of Phoenix confirmed four of its Sky Harbor employees have tested positive for the virus.

“It’s garbage that we don’t have that information and we should on a daily basis,” Peterson said. “And the government should be demanding to kind of quantify what it really looks like in the industry.”

American Airlines employees in Phoenix are using Facebook to share test results with colleagues within a private group, posting dates they received positive results, their latest shift and locations worked.

At Dallas Fort Worth International Airport, at least 44 ramp workers employed by American Airlines and one of its subsidiaries, Envoy Airlines, have been infected by COVID-19, and two of those workers have died, according to tallies by Peterson and the Transport Workers Union. At least one of those fatalities happened before Sky Harbor’s first ramp worker tested positive.

“We’re months into this, and we’re not happy about the pace that the mitigation is happening,” Peterson said.

American Airline employees who work “above the wing,” including gate agents and customer service workers, have not been hit as hard as their ramp worker counterparts at Sky Harbor, said Kimberly Barboro, president of Teamsters Local 104, which represents about 500 of those workers.

Barboro said she knows of fewer than three COVID-19 cases among the American Airlines members she represents. She thinks the airline is listening to its employees about their needs, but said the real problem is lagging federal guidance.

“We think that the government isn’t moving fast enough to put in regulations and rules so that we can be safe,” she said.

Internal American Airlines employee memos explain that employees who test positive for the virus should notify their local managers, and that personal information shared will remain confidential given medical privacy laws. Confirmed cases are then shared with the American Airlines’ Pandemic Response team to review “any team members or vendors who may have been exposed and which locations need to be sanitized. Those who have been exposed will be contacted and guided on next steps.”

American Airlines ramp employees who spoke anonymously to AZCIR said those notifications are often delayed, sometimes by more than a week at a time.

AZCIR reviewed hundreds of posts on a private Facebook group of airline employees in Phoenix, where multiple posts showed emails and text messages from American Airlines notifying employees that they may have been exposed to the virus. In some cases, employees were notified within several days. In others, notifications ranged from one week to nearly a month.

Rezler, the union representative for American Airlines’ fleet services division, said he understands the frustrations about late notifications. He said there are times when airline staff can’t reach infected employees in a timely manner to determine when their symptoms began, or confirm shifts they worked when they may have been asymptomatic. Those delays are exacerbated by the fact that the airline must then compile up to 48 hours of potential contacts among other employees.

“When the company explained some of the scenarios, it sounded legit,” Rezler said.

Internal employee documents reviewed by AZCIR state that American Airlines employees “will not receive attendance points or occurrences or be progressed through any discipline processes due to absences. American’s sick and attendance policies are designed for you to stay home when necessary and vary by workgroup.” Employees can apply for a 14 day paid leave, but they must first have a clinically confirmed case of COVID-19 or have a doctor’s note mandating they quarantine, the documents said.

But in dozens of Facebook posts on the Phoenix American Airlines private group, employees wrote about a serious disconnect between the company’s official policies and what their local managers had told them about taking time off after exposure to COVID-19. Employees expressed concern about taking sick time because they claimed local managers had warned them that using sick days could hurt their employment records.

“Anyone who has been exposed, and you have been notified, they leave it to be your choice of whether you go to get tested,” said Donald Carbonneau, president of the local IAM union.

The national IAM union has called on the CDC to release new guidance recommending transportation employees can get tested even when they are not experiencing symptoms — since the virus can be spread by people who are asymptomatic.

In recent days, locations such as Los Angeles County, San Francisco, Michigan and New York have started offering testing to all essential workers, including those without symptoms.

Peterson said the federal government needs to set minimum safety standards for transportation workers during the pandemic that can be enforced – and the equipment to go with it. For example, he would like to see the Occupational Safety and Health Administration require a minimum number of pairs of gloves and masks transportation workers need to have each day.

“We’re waiting for something to happen when it should be happening already – because we’re seeing members die,” Peterson said. “This truly is life or death.”