The too-good-to-be-true pitches paraded by the payday loan and auto title lending industries were often just that.

In 2012, with support from organizations such as Texas Appleseed, San Antonio passed an ordinance to provide consumer protections for potential victims of auto title lending, many of which often saw APR’s exceeding 500 percent.

Yet the efforts to reign in the unregulated auto title lending industry were not solely about the exploitative nature of uncapped interest rates. Stepping back, there was a larger issue at play.

Ann Baddour, director of the fair financial services project at Texas Appleseed, states the matter bluntly: “Losing a car for a low-income family in Texas is economic devastation.”

In San Antonio, few people question that the automobile reigns supreme. City Tours are done by bus. Directions are given in highway-exit-speak. And minimum parking requirements lace the city with vast parking lots between commercial structures.

All of this cumulates in San Antonio being the second least-dense city out of the 10 largest cities in the U.S. Only Phoenix has fewer inhabitants per square mile.

And when density drops, the necessity of an automobile increases. One often-cited report listed only 3 percent of San Antonio as “walkable.” Today, 91 percent of households in San Antonio own at least one vehicle — 52 percent own two vehicles or more.

For the minority who can’t rely on cars to get around town, the commute to work can take drastically longer. Maria Hernandez, a 40-year old mother of one, lost her car in an accident last November. In the blink of an eye, her commute time quadrupled.

“If my job was closer, I wouldn’t mind [riding the bus]. Although sometimes it takes forever,” Hernandez noted while trapped under the awning of the Travis Building on St. Mary’s Street downtown, the rain pummeling the sidewalk around her.

Hernandez was waiting for the 67 bus to complete her 90-minute commute home from Wurzbach Parkway to the near West Side. Before she lost her car, this route took around 20 minutes.

Hernandez is not alone in her dilemma. It’s not her fault that her job is 15 miles away, passing endless parking lots, golf courses, and low-density dwellings. The city was built that way.

San Antonio was the first major U.S. city to get rid of its streetcar system, ripping up the rail lines in 1933. In the decades since then, the city watched its businesses shift focus away from downtown, with Loop 410 emerging in 1959 and Loop 1604 completed 18 years later, the same time VIA began operations.

By 2001, only 17 percent of jobs were found within three miles of downtown.
The city had completely embraced the automobile, rendering its well-run but expensive bus system completely impractical for most commuters.

From the cost of gasoline to insurance rates to subprime auto loans to predatory auto title lending, the freedom an automobile provides comes at near-insurmountable costs for some.

In San Antonio, the costs are adding up. A 2017 study from MyLendingTree looked at customer credit data relative to income. It found that non-housing debt added up to 54.7 percent of the average household income, and the average San Antonian made over 7 credit inquiries in the last two years.

On top of that, the average delinquent debt in San Antonio is $2,173, more than $600 higher than the national average. San Antonians are accruing debt, despite a 55 percent decrease in the value of auto title loans since the city ordinance took effect five years ago.

A study by Bankrate estimated that the average San Antonian can afford to spend around $16,400 on purchasing a vehicle. In neighborhoods like Hernandez’s, where the median household income is around $25,000, an automobile can quickly push a family into debt.

All this laid fertile ground for auto title lenders to set up shop, and a lack of state regulation left cash-strapped residents vulnerable.

“These businesses depend on people’s desperation in order to be successful,” says Bernal. 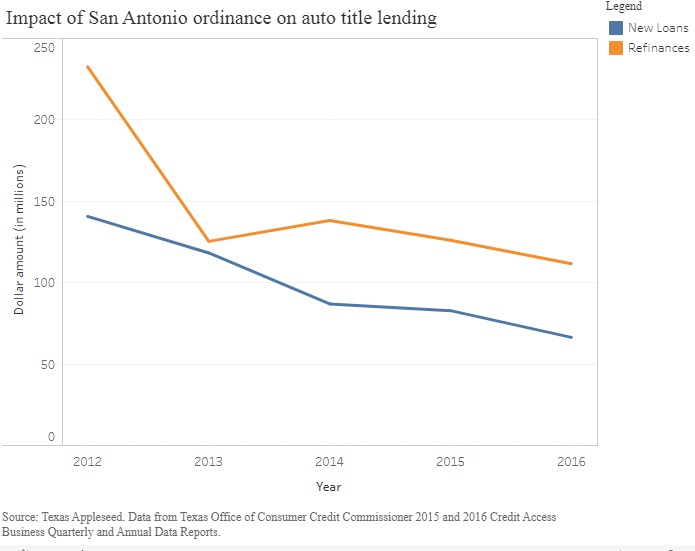 Which begs the question: why are people desperate to keep their cars? What would happen if we made neighborhoods, and daily life, a little more walkable?

In the areas surrounding downtown, San Antonio has seen the value of walkability take shape. Luxury apartments that dot the riverwalk highlight their “walkability” as an asset to attract residents.

For Christina Olivarez, 26, and her husband Pedro, 28, the appeal of a walkable community enticed them to leave Stone Oak for 1221 Broadway last year.

“What I love the most is how close we are to everything. If there’s anything we wanted to do, we can just walk,” says Olivarez, who often operates her social media strategy business out of the coffee shop across the street.

But for Maria Hernandez, a walkable community is still a long way away. Until then, she just shrugs and says, “I don’t know when I will get a car, but I know that I will if I save money.”

Saving enough money won’t be easy without acquiring debt. But for now, Hernandez can take solace in the fact that the days of 900 percent APR are in the rearview mirror.

This story was originally published by Folo Media