Florida continues to outperform the U.S. economy. Unlike many states reporting surpluses due to an infusion of federal stimulus dollars, Florida’s reporting a $20 billion surplus this fiscal year that includes no federal dollars.

“By keeping the economy open, maintaining a low tax environment, and being fiscally responsible, Florida’s FY 21-22 surplus is the largest in state history – with more than $20 billion in reserves for a budget that is just a shade over $100 billion,” DeSantis said.

Florida’s revenues have now exceeded pre-pandemic estimates by more than $8 billion, he said.

DeSantis made the announcement Friday at a news conference at Retro Fitness in West Palm Beach.

Retro Fitness relocated to West Palm Beach from New York and New Jersey in 2019 because “Florida is a business-friendly state.” Retro Fitness’ gyms in the Sunshine State have outperformed all of their other locations and the company plans to open 100 more locations in Florida alone. It currently has 175 clubs open or in development in nine states.

Andrew Alfano, CEO of Retro Fitness, said during state shutdowns that fitness centers were the first to close and the last to open during a national health crisis. Not only did lockdowns not prevent the spread of the coronavirus, but governments didn’t prioritize healthy lifestyles. But in Florida, “Gov. DeSantis recognized the importance of exercise, health and fitness,” he said. “Florida was the very first state to reopen gyms and health clubs, recognizing the importance of getting people healthy.

“Because of the governor and state policies,” he said, Retro Fitness survived the pandemic and came out of it “thriving and in growth mode.”

“I never understood with these ‘experts’ with a respiratory virus that is not nearly as lethal for young people or people that are in really good shape that you would want to not have gyms open,” DeSantis said. As he saw the data coming he said he realized, “the best thing you can do is go to the gym. And yet their message was [referring to the Biden administration], ‘sit on your couch, eat cake and watch Netflix all day.’

“That’s not a good message for health.”

Dr. Anthony Fauci criticized Florida for staying open, DeSantis said, but Florida made the right decision. “Health is more than just avoiding one specific pathogen.” In other states with strict lockdown policies, he said, there was an excess mortality of non-COVID deaths, which he said was “a combination of really bad policies.”

Curtis Peery, owner of Voodoo Bayou and Calavaras Cantina in Palm Beach Gardens, said he opened a second restaurant location one week before the state shutdown in early 2020. He’d spent a year developing the restaurant, put his life savings into it and hired 120 employees. Then the state was shut down and they were able to offer take-out and “tried to stay alive.” Since then, “Our rebound has been absolutely astronomical,” Peery said, because Florida’s economy was allowed to stay open.

The restaurant business was targeted by people like Fauci, DeSantis said. “What are they supposed to be closed forever? Our view was everyone has a right to work.”

Because the state made sure local governments couldn’t shut businesses down, Florida employers have added jobs for 24 consecutive months.

According to new state data released Friday, Florida’s seasonally adjusted total nonagricultural employment was 9,292,600 in April 2022, an increase of 58,600 jobs, or 0.6%, over the month. Its private sector employment grew by 0.7%, more than double the national rate of 0.3 percent.

This article was originally posted on Florida continues to outperform U.S. in economic success 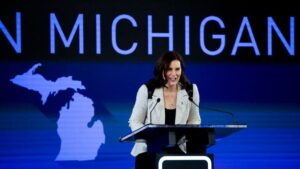